Be More Sunflower! What happens when you are the sunflower in the garden! 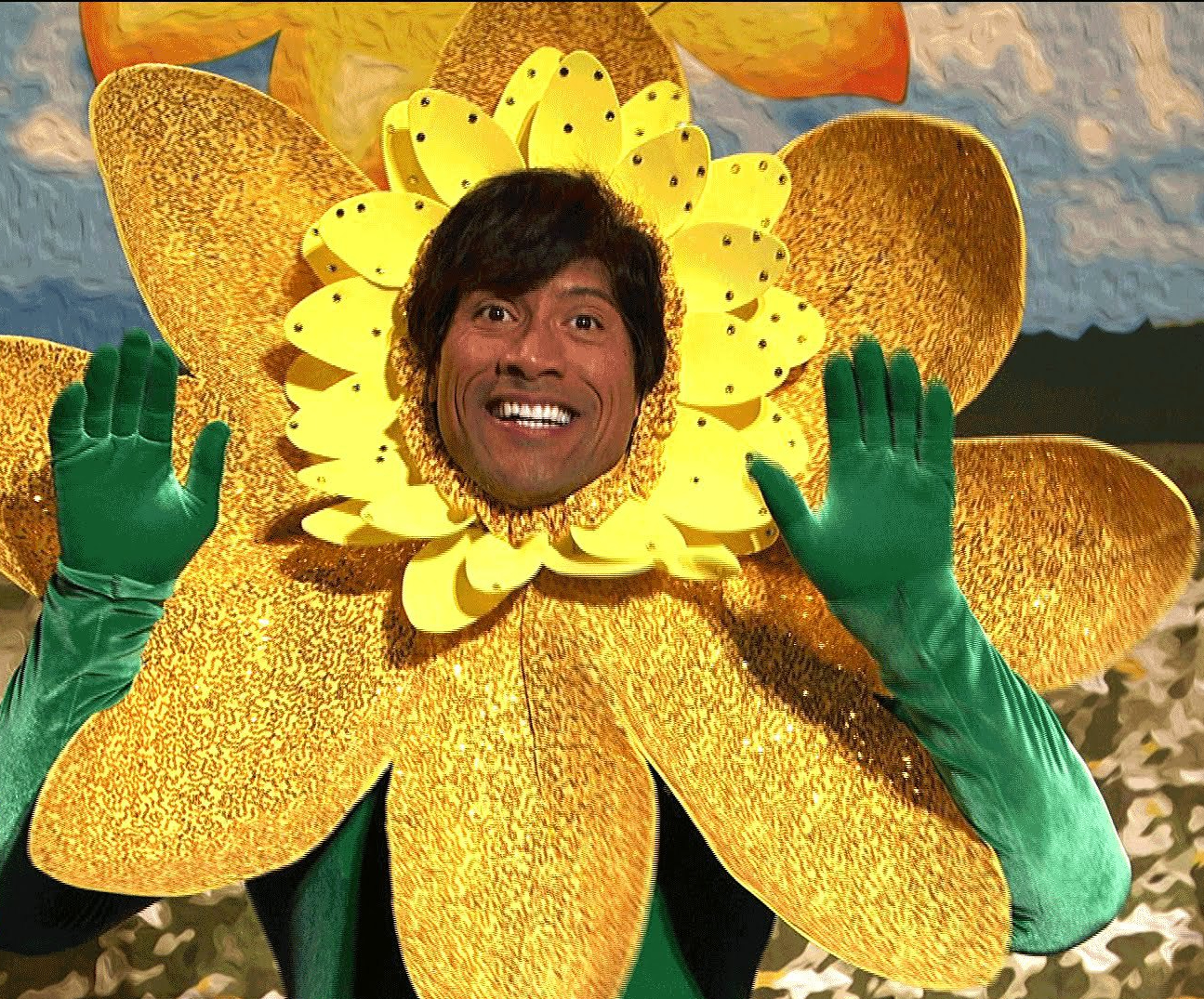 Disclaimer … I am slightly crapping myself about writing this because it is so personal. Hence The Rock dressed up as a Sunflower … he is here to distract you!

Those of you who have been following me for a while will know that before Christmas I embarked on a 6-week campaign to make myself feel less like an overboiled brussel sprout and get a bit of zing back. I called it Project Pick Me Up and you can read all about it here

When the 6 weeks were up I was happier but I was still a work in progress.

I have three children and write full time. I do most of the cleaning (obvs) and the cooking and all this takes its toll!

I believe in fate. The universe always has a plan. So when I moaned about having really painful periods on one of my Instastories I had a lovely message from Sally @womenwithsparkle. She said she wanted to help me and that there was no need for me to have to hibernate for 48 hours every month because I was in that much pain.

I was intrigued so we started skyping!

She has CHANGED me! I mean like probably changed my DNA or something ? I actually think she has magic powers. And it has also ocurred to me that maybe she doesn’t actually exist, but my life has turned into a film from the 1980s where a guardian angel has been sent to get me to sort my shit out!

What started as a way to get my periods less painful (which they totally are now by the way!) turned into a bit of a life-changing experience!

When I first started the blog it was as a bit of a joke. I didn’t think anyone would care and I certainly thought that if anyone did read it they would think I was some Stepford Wife weirdo. The fact that I thought that no one was paying attention was the main reason why I did it! Oh the irony!

So when the blog blew up over the last 12 months I started to get a bit nervous. You see I lived in jeans and jumpers (or I used to) I only ever wore flat shoes (we will get to the bit in a minute!) and my self-care routine was pretty much non-existent!

And I thought this was fine. I was happy because I only really went to the shops and the school run. Except when you read that back that isn’t fine at all is it? I had become invisible!

Then I did a couple of TV appearances, some public speaking and the press started to show a bit of interest! Shit your pants time!

I mean what do you do when Good Morning Britain phone you and ask you to go on in less than 24 hours? … you panic that’s what you do! I very quickly had to transform myself from a mum who was hiding behind her laptop in her onesie, to a woman who was confident to go on live TV, sitting in a studio with nowhere to hide.

I love being on TV, the buzz is like nothing else! And when that first appearance was over I was on a high. But then someone very close to me phoned me (I was in the taxi on the way home, so approx 30 minutes after I had been on air) and said …

“It is true what they say the TV really does put at least 10lbs on you!”

I really took this to heart! I mean who bloody wouldn’t?

I thought I wan’t good enough to appear in public. I wasn’t shiny enough. I wasn’t petite enough. I started to run (a lot) and this desire to exercise came from a place of punishment rather than self-love. I cut down on my food intake.

In steps Sally. She asked me what was wrong, why I didn’t feel confident.

I feel really confident on my blog, on my Instastories and my YouTube channel, so why not in real life?

Because on social media I can control what you all see!

Did you know that I am half an inch shy of 6ft?  Probably not because I have tried to hide it.

I used to love my height. When I was in my teens being tall was great! I wore heels and didn’t care that I towered above most people! But then as I got older and suffered a marriage breakdown and a series of other shitty events, life got on top of me and my confidence took a beating. I didn’t like the fact that being tall made me stand out.

I haven’t worn heels in 5 years. The main reason for this is because I am taller than my husband Mike. It has never bothered him, but it has bothered me. I became an expert at being photographed next to him! I would stand behind him in photos so that perspective would be kind to me, or better still I would sit down.

And it isn’t just in my head. I get comments …

They called me The Green Giant at school (you know the giant who is on the sweetcorn tin?) because I was the tallest in my class and my surname was Green. Someone has even called me The Honey Monster (and this person was supposed to be my friend).

I spent years HATING my height. My posture has suffered through hunching my shoulders and I stopped wearing my hair in a mum bun because that made me appear even taller!

But Sally said something that really hit home … she said that women are all like a different species of flower. All beautiful …  all unique.

We should be owning the thing that makes us unique … not hiding it.

You wouldn’t want a rose to pretend to be a daisy or a hydrangea to try to make itself more like a clematis!

You want the rose to BLOOM and you also want the daisy to do EXACTLY the same! They are both beautiful and have their own place in the garden.

This has changed my perspective on everything! It is like a switch has gone off in my brain.

So I just wanted to think you to Sally and also blow a big fat f-ing raspberry to anyone who has ever shamed me for my height over the years.

Oh and I wore heels at my latest filming job and I loved it! I felt like me again.

And if you haven’t guessed, I now like to think of myself as a Sunflower by the way ?